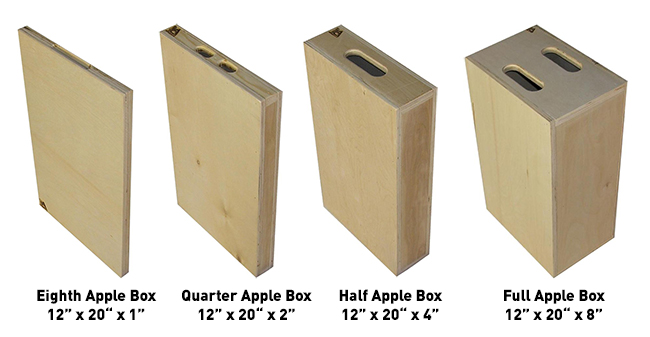 Apple boxes are a useful set of different sizes of support or height-raising devices intended to hold a significant amount of weight. There are 4 sizes; Full apple, Half apple, Quarter apple and the smallest thinnest size is called the 'Pancake'. Apple boxes are useful for rasing individual obejcts in front of camera so that they appear more pleasingly spaced, arranged or elevated to the angle of the camera. They also make great seats.

The Half Apple Box also has the same first two dimentions of a full apple, but it's shorter side is a reduced measurement of 4 inches.

A Family of apple boxes is a term used when packing or using one of each of the four sizes togther in a group.

Placing an Apple Box follows the desription used below: